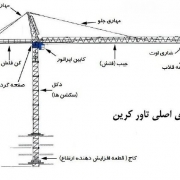 What is tower crane and how does it work?

Tower cranes are a modern form of balance levers made up of the same main components. The tower crane base (stabilization base) is usually placed in reinforced concrete and sometimes, it is secured to parts of the structure or building by the belt. Tower cranes generally provide the best combination of height and lifting capacity and are widely used in the construction of dams, towers, and high-rise buildings. During the initial installation of the tower crane, its fixing base must be carried out in accordance with the required technical specifications specified in the manual of that particular tower crane, under the supervision and approval of the building engineer. As it is impossible to access to this section and detailed inspection of the specifications during operation, the approval of the supervising engineer in this area will be required.

How did the tower crane come into being?

There has always been a problem with the construction of huge structures, especially when the work reaches great heights above ground level. Most of the time, a lot of effort and cost must be used to make materials and equipment with high weight and volume can be used in the structure. This problem was largely solved about 70 years ago with the construction of the first tower cranes. The first tower crane was invented by the ancient Greeks and worked with labor and livestock. This tower crane was used to build tall buildings with allowing heavy objects to be carried to the top of the building.

Tower cranes are an essential component of any construction site. The height increase piece, which usually has a different height from other parts of the derrick, is attached to this base, and then the sections are mounted on it and connected by standard pins and spikes or bolts. The derrick tower crane is then connected to the rotating part, which includes the motor and gears, to allow the tower crane to rotate.

The tower crane’s longer arm, the flash, is the part of the crane that is responsible for loading. And the short arm accommodates the balancing weights, which are usually made of concrete, and the arrangement of these blocks varies according to the working height of the crane, the length of the flash, and the user capacity, which is stated in the booklet of the same special type of tower crane. The tower crane operator can control it from inside the cabin or in some models, it can perform loading operations from any point through the remote control. In most cases, the operator’s cabin is located above the revolving part, but in some models, the cab is also placed on the flash or the lower part of the tower crane. Fastening the load and connecting the hook to the load is usually done by a person called a derrick or towing wire. In many cases where the tower crane operator does not have a good view of the load or when loading is done at the operator’s blind spot, the presence of a trained rigger and adhering to safety principles is crucial. Many tower crane accidents are not due to a technical defect in the tower crane, but due to a rigger failure to close the load properly or a lack of proper communication during hazards such as part of the load getting stuck to the rods or part of the structure under construction and sudden suspicion of the flash. Communication between the rigger and the tower crane operator is often done wirelessly, but both should be familiar with the standard and conventional rigging signals in order to utilize them in the event of a radio disconnection or excessive ambient noise.

How does tower crane work?

There are different types of tower cranes, almost all of which follow the same rule in the work and loading process, which includes several categories.

The loading power of the tower is based on their structure, how much tonnage it can lift from the ground, which is done by the electric motor, and the electric motor is connected to the gearbox and from the gearbox to the drum or the winch, and the required amount of the tow wire and a connector called hook is connected to the load to the required height of the device. It should be noted that after the driver and the steering wheel, the above system is controlled by a series of micro-switches because the device does not lift the excess load (tonnage) off the ground and the safety of the device is maintained. All these steps are assigned to the loading capacity or tonnage of the device.

In addition to having the power to lift the load and move it back and forth, tower cranes have a power that can move the load in a radius of 360 degrees and transfer the load to any desired point. This is usually done by 1 or 2 electric motors and 1 or 2 gearboxes, which for its safety also have built-in micro switches to prevent unnecessary bypassing.

4- Overall motion power of the device:

Tower cranes have the ability to move on the ground and transfer the whole device from one point to another. There are different in crawling on the ground; some of them are moved by being on the rails and some of the others are on chains that they are similar to tank chains and move on the ground, and other types move on big wheels that look like plane tires. All the movement of these devices is usually done by electric motors and very powerful gearboxes that have very strong brakes.

The question for the public is always how tower cranes reach high points and how they increase in height.

Want to join the discussion?
Feel free to contribute!

Description of the boilers inspection process in accordance with the National...
Scroll to top